Fargo’s Quality Bakery will be closing in the next couple months after a long, long run.

It’s understandable the owners want to hang up their rolling pins; running a bakery is a tough job, including waking up hellishly early and staying late. Pete and Marcene Fendt have done a great job with the place after they took over from Pete’s dad.

I had the opportunity to talk with Pete and take some photos a couple months back. Here’s the story:

Working in the long and narrow back kitchen at Quality Bakery in south Fargo, owner Pete Fendt certainly has the arms of a baker.

Along with his wide, white mutton chop goatee, Fendt has been at the helm of the business since the 1980s, sustaining it and its reputation as one of the best. 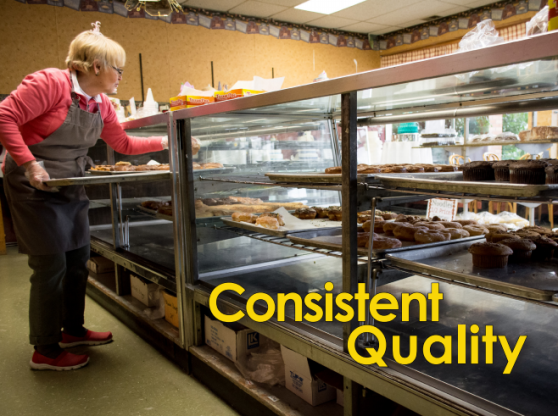 While there were three different Quality Bakery locations at once in the area, there’s now one, in the same building since 1972 at 2532 S. University Drive.

Nearing retirement, Fendt and his wife, Marcene, are looking to sell the well-known business, hopefully to someone who can keep it going. The bakery was listed for sale by the Property Resources Group for $650,000, which includes the real estate, the business or both. Fendt says he’s aware it could take time to find the right buyer and that there would be a period of transition and training. 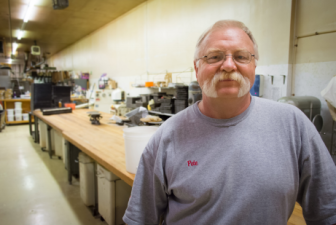 Like most other bakers, Fendt has to be at work early, readying the different products for the day. It’s an around-the-clock job, he says, but it allows some flexibility in the daytime hours for things anyone else with a 9-to-5 office job wouldn’t be able to do.

From Germany, with flour

Fendt isn’t the first in his family to catch the baking bug, though. His father, Erwin, started baking in Germany before Pete was born. A long time before, actually. Erwin, now 83, was at it when he was about 13 years old. Pete’s mother, now 87 years old, was displaced from her native Chezchoslovakia and sought refuge in Germany. She worked in a butcher shop. The Fendts’ story would have taken on a drastically different turn had it not been for an American soldier from North Dakota who sponsored the family and helped them move to Fargo in 1956. Doing what he knew best, Erwin started working at Quality Bakery and was able to become a part owner, along with two other bakers.

Having baked for such a long period time, Pete has seen his share of fads when it comes to food. He remembers when there were about eight different businesses in Fargo-Moorhead making bagels. Now, only one. Then it was a deluge of donut shops popping up around town. Cupcakes, cake pops and clever chemistry are the latest, he says. One of the biggest, if not the most pervasive, changes in food is the emphasis on gluten-free baking options. A shopper can barely head down a supermarket aisle without seeing something that’s been updated without the gluten.

When asked if there were any plans to change the menu of offerings at the bakery, Fendt says the benefits just don’t outweigh the risks and costs. To be a completely gluten-free bakery, Fendt says, requires a new kitchen with new equipment to ensure there isn’t any contamination that could cause an allergic reaction for someone with Celiac disease. But that doesn’t mean the shelves don’t see the new and innovative products that his customers want. Cake pops, for example, have been particularly popular, Fendt says.

After so many years at the helm of Quality Bakery, there will be an obvious transition to new ownership, but Fendt hopes not much else will change. Until the time comes to hand over the reins, Fendt will keep on baking.

Exploring the fabulous food of Fargo-Moorhead!

Looking for a bite in Grand Forks? Check out GFgourmet!

Error: Twitter did not respond. Please wait a few minutes and refresh this page.